As a final chapter to Rio’s blog, I wanted to say thank you so much to my Tripawds pals who’ve been so supportive through both my Rio Journey and the personal losses that my family has faced, as well.  As I wrap this up, I thought I’d share a final dog-related story with you.

My father-in-law lost his lengthy battle with cancer on May 15th.  He’d been in and (briefly) out of the hospital for over three weeks with complications from his radiation treatments last summer.  During the course of the hospital stay, his short term memory had gotten pretty spotty, and you never really knew for certain if he understood much of anything from one moment to another.

My mother-in-law had spoken with hospice folks to see if we could bring him home, and they had recommended giving him a goal to work towards.  On that final Sunday afternoon (Mother’s Day), we had reminded him several times of his role in my nephew’s senior project, and how he was counting on his Grandpa to help him finish.  He’d answered appropriately when asked about the project and why he needed to go home, but it seemed to me his heart wasn’t really in it — like he knew that it wasn’t going to happen.  At one point, somewhat out of the blue, he said he needed to go home so he could see Jackson, my in-laws’ little Cocker Spaniel.  My mother-in-law repeated this story to the nurse on duty, who told us that if we waited until just before 9:00 PM, when the front desk closed down, we could sneak him in the back way and bring him up for a visit.  She told us to just say he was a service dog if anyone asked.

As the afternoon wore on that day, it was pretty clear that Dad was failing.  We kept trying to buoy him up by telling him that Jackson was coming, and he just needed to wait a little longer.  By 7:00, his pain was increasing, and we weren’t sure that he would be able to hold on very much longer, so we sent my husband and his sister to pick him up.  While we waited, I kept telling him Jackson was coming, and once Dad had visited with him, the nurses would come and give him his pain meds, and then he could sleep.  I felt though, when I said this, that he understood that I meant it would be alright to leave us altogether.

When my husband brought the little dog into the hospital room, and set him in Dad’s lap, there was an immediate recognition, a big smile.  He said, “Jackson,” and it was the first time all day that he’d really recognized anyone.  He asked if he could give Jackson a kiss…  He fed little Jacky several cookies and gave him a kiss, and then he said, “I’m done.”  My husband picked up the dog and headed toward the door, and as he walked away, his father’s eyes dilated and fixed on a place somewhere across the room.  Although he lived for two more days, he never came back to us after that moment.

I had the honor of being next to his bed, along with my mother-in-law, sister-in-law and niece, when he took his final breaths.  We held his hands and sent him on his way with so very much love.  After he was gone, we all kissed him goodbye, and as I did, I told him that Rio was waiting for him and she would take care of him for us.  Even though I’m one of those people who doesn’t really believe in an afterlife, it still makes me feel better to think that somewhere Rio is bringing her grandpa a ball to throw for her. 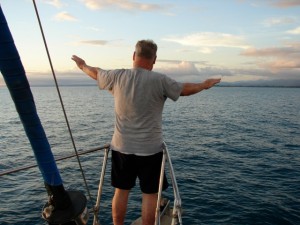 You truly were the king of the world.

9 thoughts on “The Power of Dog”