We finally got some nice weather here in the Puget Sound.  It’s been monsooning for weeks now, so we haven’t been able to spend much time outside yet this spring.  So when the sun finally came out and we had a glorious spring day, we spent the entire day outside.  The three girls sniffed and explored and grazed (until mom, the killjoy said “no more grass”).  We hiked down our trails through the woods, Rio’s first real walkabout in weeks.  I told Rio she was like Little Bunny Foo-Foo, hopping through the forest!  She did really well, but going uphill, she did have to stop and rest several times, and then she went and laid on the bed that I’d set out for her in the driveway. 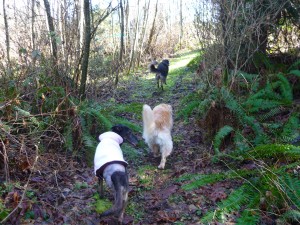 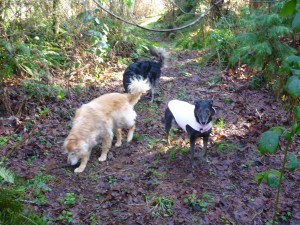 The girls are going hiking 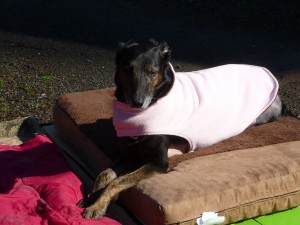 Ah, sunshine, you've been away for far too long....

But there was no stopping this girl!  After a short rest, she got up and went sniffing around again.  And then our friend Mira dropped by for some playtime.  She’s going in for TPLO surgery on Monday, and her mom wanted her to have some fun with Zeffy before she goes into her extended confinement.  No running, jumping, rough-housing for Mira for 8 long weeks!  (That’s so much worse than Rio’s recovery.)  Zephyr and Mira were crazy, wrestling like grizzly bears and chasing each other in circles around the house.  And crashing into Rio with reckless monkeybutt abandon….  Rio got pretty stern with Mira when she tried to jump on the Woo.  She told her in no uncertain terms that maybe Zephyr liked wrestling, but it was definitely beneath Rio’s dignity.

Mira was full of crazy antics yesterday.  She’s only a year and a half old, and sometimes she’s just naughty, but she was definitely having one of those days.  At one point, she vanished!  And we ran all over the neighborhood, up and down the road, calling her name.  Her mom even jumped in the car and drove all the way down the road, both ways looking for her.  No sight of Mira, anywhere.  We were starting to get really worried, and then we found her.  She had snuck into the house and the door closed behind her.  The crazy girl was running all over the house trying to get out.

We were putting up a shed in the backyard, one of those kinds that have the canvas tarp-like exteriors, and Mira was sniffing around one of the end panels and got hung up on it.  When she moved, it chased her and scared her, so she tried to get away from it by running really fast.  But the wily thing just followed her as she raced off through the bushes.  It chased her for about two hundred feet before she was able to get away from it.  She was so scared that she sprayed herself, and then she had to have her butt washed in the driveway before she could get into the car with her mom.

Later, after dinner and some napping, we got into the car and drove down to the beach to watch the super moon.  It was amazing!  As it came up over the Cascade range, it was so gigantic!  We were so happy that we’d had clear skies so that we could witness this epic event.  And although this winter has been so very bleak, and we’ve practically been drowning in these monsoon rain storms, I was reminded last night as the moon rose, its enormous glowing golden-ness reflecting in the sparkling waters of Puget Sound, of why it’s so great to live here. 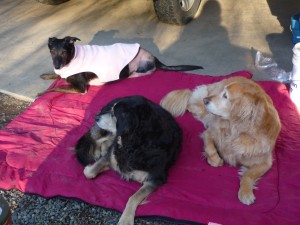